Goal of the project

The aim of this research group is to examine the role played in cultural transmission by the Christian lower priesthood living in local communities in 18th-20th century Hungary and Transylvania. Researchers mainly use the method of case studies to map out the complex and changing conditions of the social function, everyday life and mentality of the priests on the bottom rung of the clerical hierarchy. Particular emphasis is placed on the activity of priests active at the focus points of interaction between elite and popular culture who, starting from the second half of the 18th century, often reflected directly and in a written form on the cultural practices of the population of villages and market towns. During the period between the enlightenment and romanticism it became the dominant attitude among priests to shift from the position of prohibition/reform of the old ways toward a value-centred approach when writing about folk culture for the benefit of posterity. Case studies from Transylvania highlight the role of Unitarian pastors in connection with folk poetry research, which gained momentum during the age of romanticism. Another important question is that of political-ideological and intra-church movements in the 19th and 20th centuries which influenced the thinking of the lower clergy living in the local force-field or on the way in which they themselves were perceived by their environment. In the nearly three centuries that we bring under examination here, the problems of national identity, of living in a minority, of local religion and the co-existence of different denominations manifested themselves in many different ways. Research analyses and interprets this through the filter of archive sources concerning the lower clergy living on the local levels.

Our investigations focus on the two centuries between 1750 and 1950, but also maintain a lookout on the half centuries before and after this period. Of the various Christian denominations, the emphasis is laid on Roman Catholic, Calvinist, Lutheran and Unitarian priests and pastors, but our research team will also conduct brief explorations to form an idea about the conditions of the Greek Catholic and Greek Orthodox denominations and various small churches. In the second half of the 18th century a shift becomes noticeable among the lower clergy which moves from the initial position of wanting to reform popular or folk culture to that of discovering the values of that same culture. The process has been discussed in its international ramifications by P. Burke (1978) as well as many others, but, for the time being, its manifestations in Hungary can only be surmised. It is up to upcoming research efforts to clarify the process and motivations of this shift of attitude in the form of case studies. A further important development from the point of view of the history of ethnography has been the way in which the priesthood which at first showed a simple romantic enthusiasm about folk culture (ancient religion, folk poetry) shifted during a good hundred-year period to discovering the vernacular practice of the official religion, to the point where, in 1920, religious ethnography finally adopted the goal of studying vernacular religious practice. Our research will aim to discover written off-prints of the varied range of priestly attitudes and the related traces of the late Baroque, the Enlightenment, romanticism and other intellectual tendencies. There have been very few studies to date concerning the ways in which 19th and 20th century ideologies and social and political movements influenced the conduct of clerics on the local level. In the context of the Hungarian population who fell into a minority situation after 1920, the activity of the local priesthood was almost inherently tied in with the mission of retaining national (ethnic) identity and with shaping pastoral and religious practices in ways that followed from a minority existence. In Transylvania, just as in other regions of former, historical Hungary, problems of the coexistence of different denominations were rife and these come into the foreground through our focus on locality and the role of the local vicar.

Sub-themes of the research project

1. The lower clergy in local communities of the 18th century

2. Between Enlightenment and romanticism: priests’ autobiographies from the turn of the 18th-19th centuries (1790-1830)

4. Changes in the attitude of the priesthood and the reform of rural religious practice. Catholic behaviour forms in the diocese of Székesfehérvár (1850-1920)

6.  Calvinist domestic mission in Transylvania (first half of the 20th century)

7. Deep-probing source explorations in the fields of monastic life, Protestant religious practice in Trans-Danubia and the Greek Catholic and Greek Orthodox priesthood of Transylvania

The research team cannot realistically strive to cover the entire thematic, denominational and geographical terrain associated with our research question. However, we can form a research field consisting of a range of field-work locations which represent the versatility of the Carpathian Basin with a satisfactory degree of accuracy. In its current stage the research project does not venture to promise a macro-level summary but instead chooses to deploy methods of historical folkloristics, historical anthropology, mentality history and microhistory to produce medium and micro-level analyses. On the medium level we offer regional reviews outlined according to diocese boundaries. In these frames we will discuss source material from Roman Catholic dioceses of Kalocsa, Vác, Székesfehérvár, Veszprém and Gyulafehérvár, as well as Calvinist and Unitarian sources from Transylvania. Relevant sources of the Benedictine diocese of Pannonhalma and the Franciscan province of Kapisztrán are also going to be explored. A separate micro-region within the overall scope of our studies comprises a specific group of villages from Nógrád County, where Catholic and Lutheran sources will be compared in producing our analysis. Micro-level examinations really come into their own when it comes to case studies, which allow us glimpses into the everyday life of local communities. These case-studies are centred around the complex relations of the priest and the community, harmonious or conflict-ridden co-existence, questions of sacral economy, stereotypes of the ‘good priest’ and the ‘bad priest’ as shaped from above and from below, the subtleties of ‘priest-keeping’, intentions related to preserving traditions and creating new customs and the differing temperaments of priests in relation to all of the above. The microhistorical perspective allows us to create ‘dense descriptions’ (Geertz) based on the suitable source groups (e.g. documentation of conflicts with plenty of witness statement). Investigations of our research group also extend to clerical authors (particularly of the 19th century) who reflected on popular culture in some sort of printed work or participated in the early ethnographic or Volkskunde efforts unfolding in the period. The exploration of documents concerning their biographies and activity as local priests promise to yield significant contributions to the history of scholarship. Besides clerical authors who produced printed works (e.g. papers on ethnography, studies on the ancient religion or publications of folk poetry) a forthcoming digital clerical database will contain the names and data of all clerics in our scope who ever reflected on the local community and popular culture surrounding them (in autograph manuscripts, letters, historia domus books, witness statements of legal disputes etc.), as well as the archive notes on the relevant source documentation.

Formal commitments of the research project

The group commits to create and launch its own website by the second year; from the third year onwards this is to contain an increasing amount of data within the online digital clerical database. The number of papers we plan to publish, including the work of external scholars, is 40. Members of the research team commit to organise an international symposium in Budapest inviting the noted European and American researchers of the field. Besides, the research team will organise three workshops with the participation of Hungarian researchers both from Hungary and the ethnic territories outside the country’s borders (one of them being the project launch event). Based partly on the material of these symposia we are to edit and publish two volumes of papers in Hungarian and one collection of papers in English. The research project commits to complete five source publications and six monographs. Members of the group will edit and make accessible online at least one issue of a learned journal on historical folkloristics which is to contain their own papers (as well as those of contributing undergraduate and postgraduate students) and relevant translations. 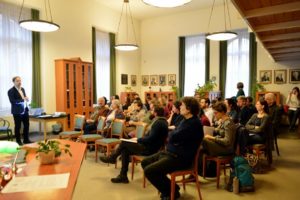